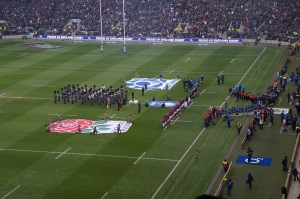 A dull January turned into an exciting February with the start of the Six Nations rugby last weekend. As luck would have it, a couple of tickets to the England v Scotland game came our way via a good friend, and the in-laws were kind enough to have the kids, so off we went for a jolly day out to Twickenham to watch England retain the Calcutta Cup.

The onslaught of ‘the Internationals’ as one of my Welsh friends refers to the Six Nations, has meant little wine drinking when out and about, and my attentions have been turned to my favourite session tipple, Guinness. One thing I really, really miss since having the kids, is a good knees up watching the rugby and I’d never ever thought I’d admit how I’d miss standing near the gents’ loo in a packed out grotty boozer, watching a rugby match on the telly (in this case the Wales v Ireland game prior to the England match). This is one visit to a pub that is not conducive to mixing with the kids. 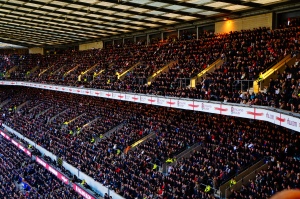 Despite a lack of drinking wine and eating out (unless you count the pork roll I had from a van opposite the Cabbage Patch) to report, I have managed to pack in a few wines at home over the past few weeks, mainly Spanish since the January Rioja Wine Team tasting, plus my other half having been away on business to Madrid;

Emina Crianza, Ribera del Duero 2009 14%, Madrid Airport €9 or Ocado £14.99 (07 vintage)
I know, I know, duty-free wine, almost on-par with petrol station carnations, but due to the hand luggage liquid ban, it was that or nothing, and it’s always more exciting drinking a wine that you know was bought from the country of origin! I typically find Duero wine offers more bang for your buck in fruit and alcohol than Rioja due to the hotter climate and this particular wine, certainly lived up to that expectation. A well-rounded Tempranillo with liquorice and fruity blackberry notes stood up well to our Friday night curry. Superb value for €9 but perhaps a little steep at £15 – could do worse from a supermarket at that price though.

Artesa Crianza 2009, Rioja 13%, Italian Continental Stores, Maidenhead £8ish
I realise that many of my recommendations have been from online merchants or those further afield, so I wanted to keep it closer to home for this post. The Italian Conti in Maidenhead, infamous locally for their excellent deli and their ‘interesting’ service (the dude at the til has become remarkably more welcoming since our attendance with children and since they moved to their new, more lavish premises), are often overlooked for their wine selection despite being featured often in Decanter magazine. This dry and smokey Crianza could well stand up to many young Reservas, with well balanced redcurrant fruit, subtle tannin (for a Rioja) and a slight waxy hint on the nose. At £8, this is an excellent wine, certainly out performing many of the more expensive wines from The Wine Society tried at the Wine Team tasting last month. Delicious with Manchego, or a favourite from the Italian Conti deli itself, Provolone Picante cheese and garlic olives.